Lively, mysterious, affordable, decidedly un-Western and with a fascinating history forged through the war and woe of Balkan geopolitics, the Serbian capital can feel worlds away. This city of nearly two million people has a fast-paced nightlife and thriving cultural scene, even during the autumn and winter months. Looking at the city of Belgrade today, it is hard to believe that it was a NATO bombing target as recently as 1999.

Before Yugoslavia’s meltdown in the 1990s, Belgrade was the capital of the most pro-Western country between the West and the former Eastern bloc. That is why, compared to other Eastern European countries, people lived their lives as part of the global culture and subculture, many Serbs than locals elsewhere do speak English, the importance of good service is widely appreciated and a positive can-do attitude generally pervades. 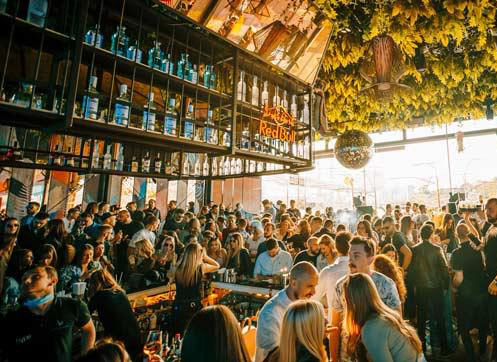 Evidence of the 1999 bombing still exists, most strikingly at the former military headquarters on Kneza Milosa St. The 1990s war was the fourth offensive attack endured by the city in the 20th century, and its earlier history was also combative. First founded in 300 BC as Celtic settlement, since the Roman conquest called Singidunum, Belgrade is one of Europe’s oldest cities. Having been fortified by the Romans on the promontory overlooking the Danube/Sava confluence, Singidunum for centuries had been one of the more important outposts on the Roman Limes frontier. For much of the last millennium, however, Belgrade stood on the border of two major empires, the Habsburg and the Ottoman, whose forces faced each other at the confluence of the two rivers.

The original settlements were on a strategic hill now called Kalemegdan and is a beautiful park complex in the heart of the Old town (Stari Grad), dominated by a fortress affording spectacular views. With its medieval gates, Orthodox churches and Muslim relics, Kalemegdan is the stern embodiment of Belgrade’s bloody past. The fortress was built on Celtic and Roman remains but mainly dates from the 18th century.

The Military Museum in Kalemegdan holds 40,000 exhibits dating from ancient times to the NATO bombing, including parts of a downed US Stealth bomber and a US Army Hummer vehicle. Kalemegdan also houses the Citadel Museum and the Belgrade Zoo.

Kalemegdan Park is at one end of Kneza Mihaila, an old Roman road that is now a major pedestrian thoroughfare similar to Vienna’s Kärtnerstrasse packed with terrace cafés. At the opposite end is Trg Republike, a square with Belgrade’s other main tourist attraction, the National Museum. Opened in 1844, its three floors explore the history of the Serbian people. It also houses a small art museum, with works by Picasso, Renoir and Monet.

Out of the multitude of galleries and museums around the Old Town, don’t miss the Palace of Princess Ljubica for Balkan opulence, or the vast Temple of St. Sava on Vračar Hill, one of the world’s largest Christian Orthodox churches.